From 10 to 16 December 2019, the INTAMT Academy organised four workshops as part of the DISEMEX+East project to promote the professional inclusion of people with disabilities in four countries: Armenia (Yerevan), Georgia (Tbilisi), Russia (Ekaterinburg) and Ukraine (Kyiv). The project is co-financed by the Federal Foreign Office under the programme of development of a cooperation with the civil society in the Eastern Partnership countries and Russia. The aim of the workshops was to present best practice examples from Germany.

The workshops were spread over four countries participating in the project and took place as independent events, such as in Yerevan (Armenia) and Tbilisi (Georgia), or as part of larger forums organized by various partners of the INTAMT Academy in Yekaterinburg (Russia) and Kyiv (Ukraine).

Dr. Wolfgang Degner presented various employment models for people with various disabilities, both in appropriate workshops and in the primary labour market to the participants of the event. In addition, he used practical examples to illustrate current approaches that employees of his organisation use in their daily work. Special attention was paid to the work of Integrationsfachdienstes (IFD) – a professional counselling service that, among other things, accompanies (severely) disabled students from school into working life. Within the framework of an individual specialist programme lasting one to three years, the young people are given the opportunity to discover their potential, receive specialist support and advice, complete a work placement in order to subsequently take up employment or continue their vocational training in a selected qualification, depending on the results. For those who, due to their particular health situation, do not have access to the secondary vocational education programme, there is the possibility of individual in-company apprenticeship to obtain a job under the supported employment programme.

Special attention has been paid to highlighting various factors necessary for the successful integration of people with disabilities into the primary labour market, such as close cooperation with companies, permanent contact persons, open communication on all issues arising, involvement of colleagues and the presence of a mentor.

An important contribution to integration is the correct design of the workplace, i.e. adaptation to the skills and potential of an employee with disabilities. In this way the work is adapted to the person and not vice versa!

Finally, Mr. Degner explained more current forms of vocational support for people with disabilities, such as the Talent-PASS programme, which aims to uncover the potential of those people with disabilities who are already in employment but do not have a vocational qualification, to recognise their skills and to train them further. The aim of this programme is to identify competences that have not been acquired through training or apprenticeship but informally (in working life), to make them comparable to job descriptions from legally regulated professions and to certify parts of a job description (modules, competence modules).

As best practice examples, the success stories of companies that published job advertisements for people with disabilities on the Capjob portal were presented. These include well-known IT companies such as SAP and Auticon, which hire people with autism spectrum disorders; the international car rental company “Rent-a-car”, which offers people with various disabilities an opportunity for professional integration, and the company “Discovering Hands Service GmbH”, which trains blind and visually impaired women in tactile breast cancer diagnosis techniques and offers them a job placement service.

The event was attended by over 100 people from different regions. Current issues of the development of entrepreneurial aspirations of organizations representing the interests of people with disabilities and providing most jobs for these people in the Ukraine, as well as their activities under the new laws adopted by the Verkhovna Rada at the end of the year, which aim to create economic incentives for such enterprises, were discussed. In addition to representatives of public institutions, the conference was attended by Valery Sushkevich, the Ukrainian President’s Representative for Disabled Persons, Vitaliy Muzychenko, the Deputy Minister of Social Policy of Ukraine and members of parliament.

The reports of German experts who presented some of the best European practices in the second part of the conference were followed with great interest. In the subsequent discussion, numerous questions on different forms of supported employment, such as the availability of special state benefits for inclusive enterprises with over 50% of employees with various disabilities, were answered.

The second workshop took place on 12 December in the capital of the Ural region, Ekaterinburg, as part of the two-day international conference “Extrability as a phenomenon of inclusion culture: building inclusion culture in organisations”. The conference was organised by a long-term partner of the INTAMT Academy, the autonomous non-profit organisation for visually impaired people “Belaya Trost” (“White Walking Stick”) together with the Ural Federal University, the Ministry of Social Policy of the Sverdlovsk Region, and the Institute of Management and Competitive Strategies. Representatives and visitors from 11 countries, 29 cities and 34 institutions took part in the conference. The workshop with German experts took place within the framework of the panel discussion “Social projects in the field of inclusion” moderated by Yuri Nikitin and encountered immense interest from the audience. This was evidenced by the numerous questions that were asked both during the event itself and after its conclusion on the fringes of the conference.

The event “Job Placement for People with Disabilities”, which took place on 14 December in Yerevan in the conference room of the “Ramada” hotel, encountered an even greater response. Although it fell on a Saturday, more than 60 participants from all corners of Armenia joined. A special confirmation of the great interest in the workshop to explore the German experience in the field of employment of people with disabilities, organized jointly with the non-profit organization “Agata”, was the participation of high-ranking guests, Arman Udumyan, Deputy Minister of Labour and Social Affairs, Amalia Adamyan, Head of the Regional Employment Service of Gyumri Oblast at the State Employment Agency, and representatives of public and social institutions. During the lectures and the subsequent lively discussion, numerous issues were discussed in detail, including the compensatory levy, the basis for the success of the supported employment, special support approaches for people with sensory disabilities, technical equipment of the workplaces and acquisition of the necessary aids, as well as possibilities of financial support for people with disabilities, etc.

In a similar format and under the same title, an event to explore German experiences in the field of inclusive employment and placement took place on 16 December in Tbilisi, capital of Georgia, at the headquarter of the non-governmental organisation “Anika”. The round table was attended by colleagues from various social sector organisations as well as representatives of municipal authorities and administrative bodies, including Gigant Sopromadze, Executive Secretary of the Tbilisi City Coordination Council for the Affairs of People with Disabilities and Mariam Bezarashvili, Head of the Employment Promotion Department of the Municipal Social Welfare Office. During the presentations and the exchange of views, a wide range of social and professional participation issues were addressed. Much attention was paid to the actual problems that stand in the way of the further development of inclusion and the approaches to solving them, taking into account the local conditions in both Georgia and Germany. The Georgian colleagues presented various projects aimed at full inclusion, ranging from the school offers – in form of special vocational orientation programmes for pupils with special educational needs – to successful examples of the full integration of people with disabilities into the general labour market, which serve as positive examples of successful cooperation between authorities, social organisations and the private sector.

The fact that the event completely blasted the planned time format, showed that there are still many topics for professional discussion. In this connection, all participants noted the need to continue the exchange of experience between public organizations and experts from both countries and the in-depth systematic research of best practice examples in the field of inclusive vocational training and employment services and unanimously expressed their support for the further development of an international cooperation between Georgia, Germany, other countries of the EU’s Eastern Partnership and the European Union. Afterwards the participants of the workshop thanked the organisers for the opportunity to take another small step in the right direction.

At this point, the INTAMT Academy would like to express its sincere thanks to the staff of the National Assembly of the Disabled of Ukraine, the organization “Belaya Trost” (Russia), the Center for the Protection of the Rights of Women with Disabilities “Agate” (Armenia), the Association “Anika” (Georgia) and personally to Victoria Nazarenko, Oleg Kolpashchikov, Karina Grigoryan, Gayane Grigoryan, Irina Inasaridze and Kathy Mikeladze for the excellent organization of the events! 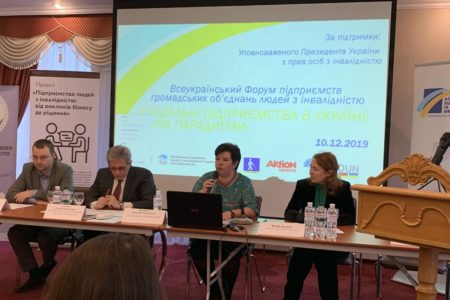 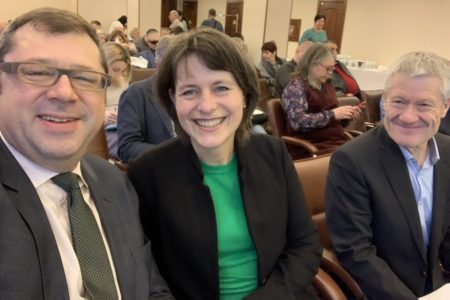 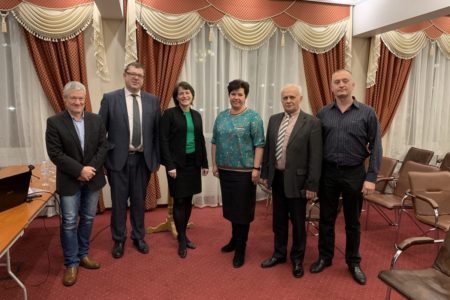 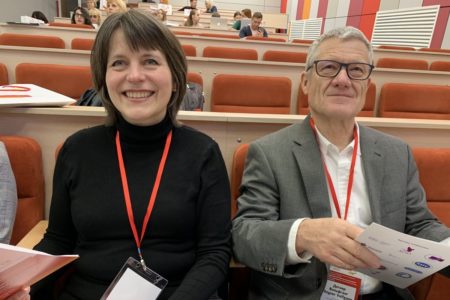 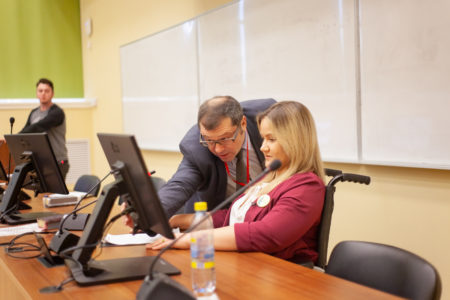 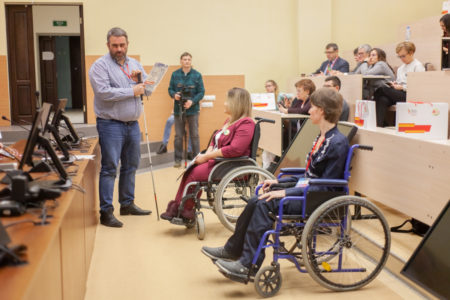 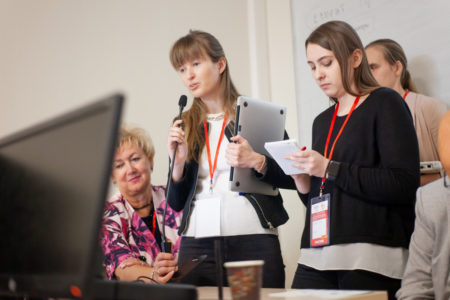 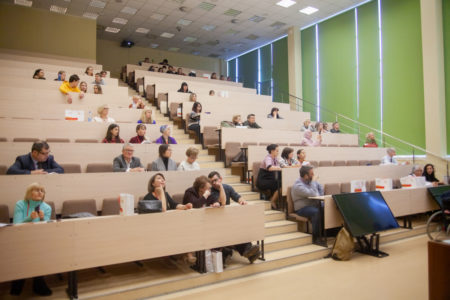 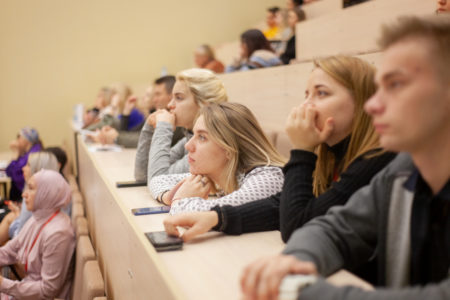 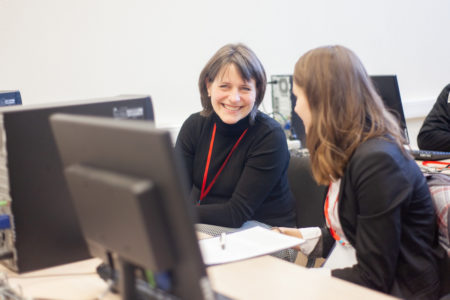 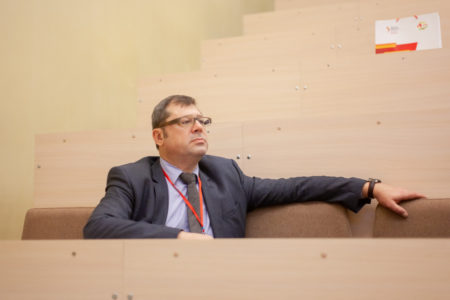 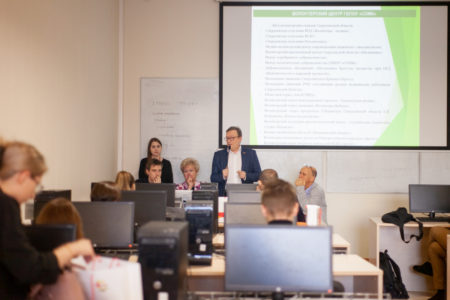 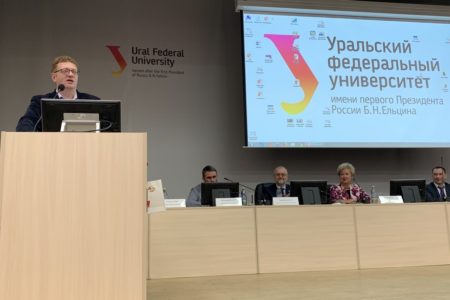 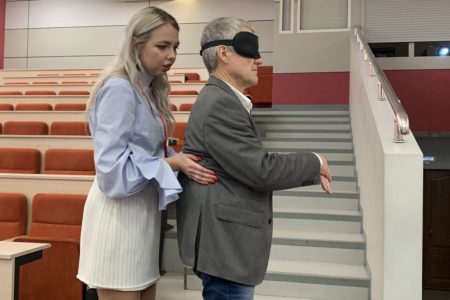 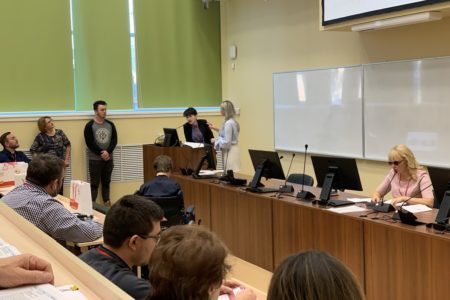 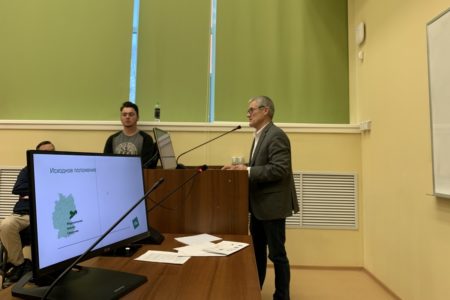 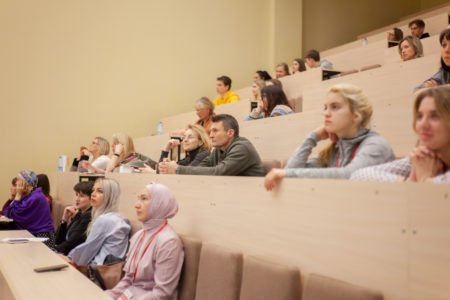 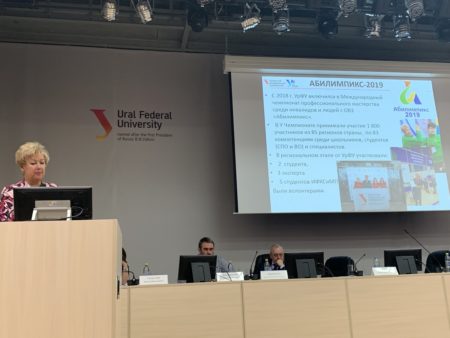 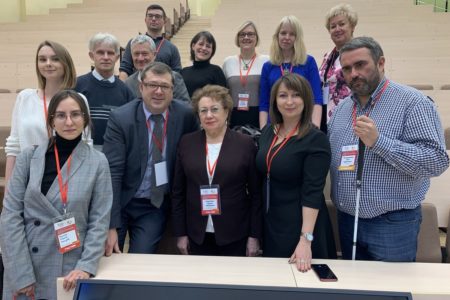 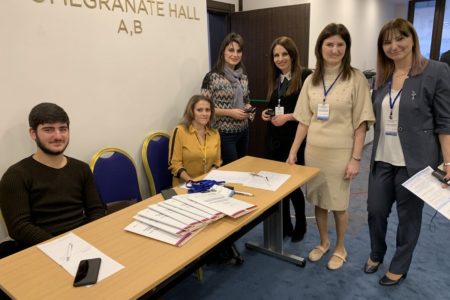 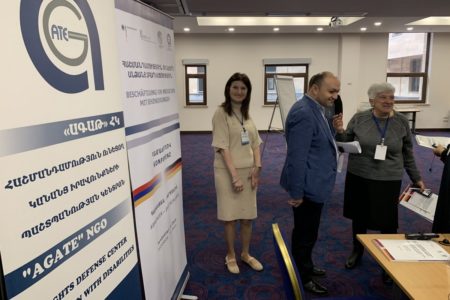 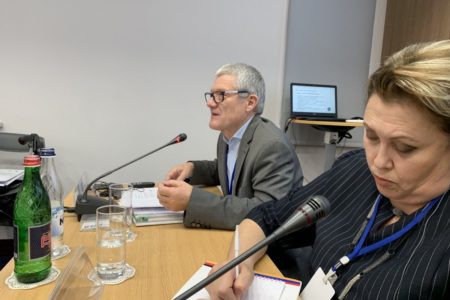 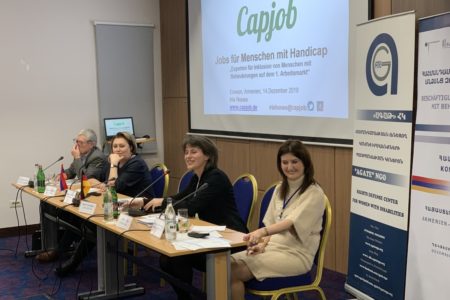 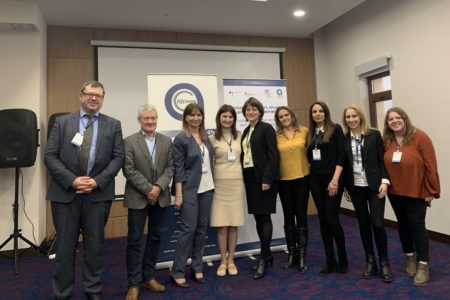 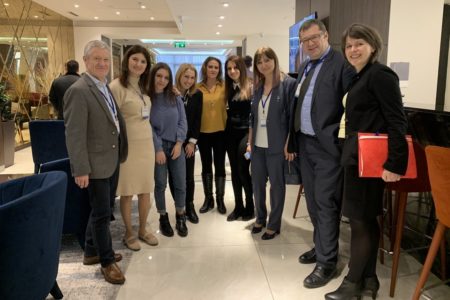 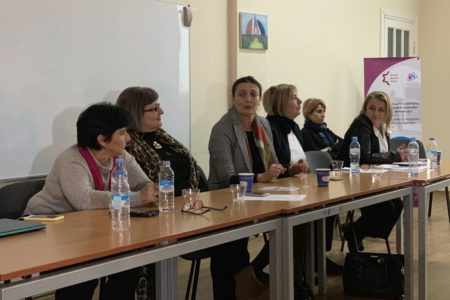 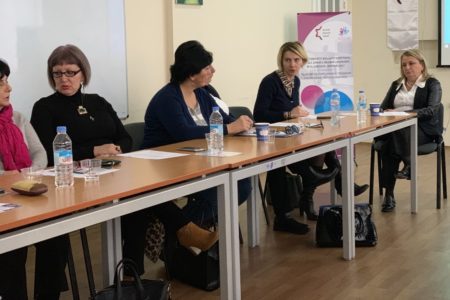 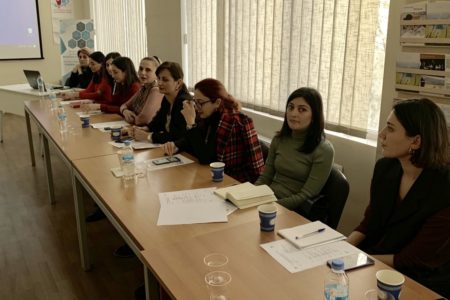 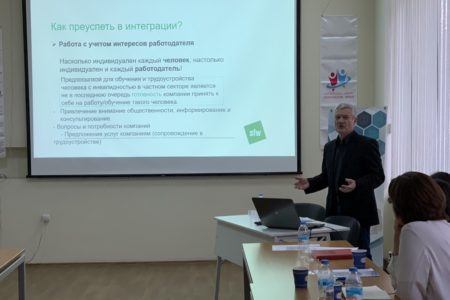 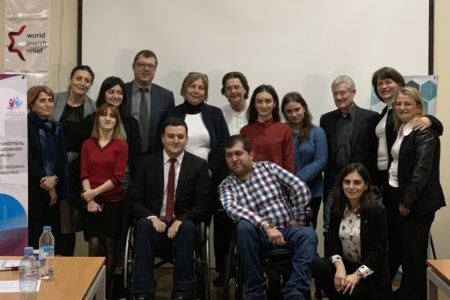